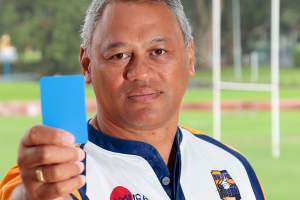 Players and spectators at local rugby games might notice referees have an extra coloured card up their sleeve.

As well as the usual red and yellow cards, refs now have the option of awarding a blue card if they suspect a player has been concussed.

The presentation of a ‘blue card' means the player will have to leave the field immediately and will not be permitted to return for 21 days, if aged 19-plus, or 23 days for those under 19.

“Changes have been made to how high tackles are dealt with. For example, leading to higher sanctions for any contact with the head or neck region. It's all part of a wider policy to make the game safer for our players,” says Pat.

New Zealand Rugby has made blue cards compulsory for senior rugby in all 14 Mitre 10 Cup provinces, although any referee who is trained in the use of the blue cards can issue them at lower levels.

Pat says they can't be challenged on the field, but the stand-down period following a suspected concussion can be shortened.

“The card can be challenged after the game through a medical process, by producing evidence from one of New Zealand Rugby's approved head injury specialists that the player isn't concussed.”

The card has only been available for two weeks, but it's already been used.

“We've had four blue cards since it was introduced in the Bay of Plenty, and all of them have been glaringly obvious concussions,” says Pat.

“We had one Under-15 boy knock himself out. The mother spoke to me and was really pleased someone from the rugby union got in touch about it, and was able to provide information from doctors.”

Groundwork has been undertaken with local district health boards since last September, so medical practitioners across the Bay are on the same page as the rugby union.

“The word ‘concussion' is used quite loose and liberally. But it's actually a traumatic brain injury,” says Pat.

“And when you start using that language with mums and dads, suddenly it becomes a serious matter. “People are starting to take notice and do the right things, like seeking medical attention immediately, or not drinking alcohol after a suspected concussion.”