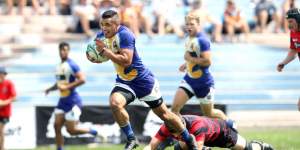 The Bay of Plenty's men's team finished their 2017 Bayleys National Sevens on a high, winning the Bowl final.

Bay of Plenty beat Canterbury 19-14 in their final match at the Rotorua International Stadium yesterday, after previously reaching the Cup semifinals in the previous two years.

New Zealand Sevens' captain Scott Curry, who was a stand out for his side over the two days of competition, scored two tries in the final.

Danny Kayes also touched down for the Bay - with two of the tries converted. While Amanaki Nicole scored for Canterbury and Milford Keresoma scored a converted try.

Bay of Plenty progressed to the final after beating North Harbour 33-0 in the semifinal and Otago 26-17 in the quarters of the Bowl. The home side were knocked out of contention at the end of day one after losing two out of their three pool games.

It was the fourth year in a row the National Sevens have been held in Rotorua featuring the best provincial sides in the country.

National selectors including new All Blacks Sevens head coach Clark Laidlaw, who travelled from the UK to attend the event were out and about at the tournament with places still up for grabs for the 2016-2017 HSBC World Sevens Series.