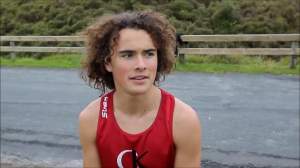 With 1000m left to run in the senior boys race at the 2017 NZ Secondary Schools Cross Country Championships in Christchurch, there were three runners in contention.

Priddey made a break but Tanner stayed close and, with 200m left, went past him to win the national title by a second, with Moulai 10 seconds further back.

It was one of the great finishes in recent years at the event and a milestone victory for Tanner, 16.

"I knew Isaiah and Nick would give me a fair challenge and I just did my best. When Isaiah broke with a kilometre to go I followed him and then passed him and managed to hold on to the end," he said.

"I didn't really mind when I won it. I just wanted to win it. I knew it would be awesome to win this year but hopefully I can back it up with next year's win as well."

Winning the title was "pretty cool", he said.

"It is definitely an honour to have that title placed on you. There will be a lot of pressure coming into other races but I am pretty stoked and I don't give in to pressure too much. It is all good."

Tanner has the national club champs in Auckland to come before the Australian champs in Hobart in August.

Over the summer he will compete on the track under the guidance of his Tauranga-based coach, Craig Kirkwood.

"I haven't decided on what events I am doing at the end of year and beginning of next year for track but I will definitely aim to do some of them at the New Zealand Secondary School Athletics champs and also the club champs as well. It will be fun."

Kirkwood has worked with Tanner since November last year and was in Christchurch to see him win the title.

"It was an interesting outcome considering the talent that was there. There were probably four or five of them who were exceptional runners and could have won it on the day," Kirkwood said.

"Sam came to me at the end of last year for some coaching and said to me 'I want to win national cross.' So I thought 'Okay, let's give it a nudge.'

"We just kind of started from scratch really and did some work through December and January then some fine tuning between then and now."

Kirkwood saw enough in the last six weeks to realise his young charge was ready.

"He showed me he was certainly capable of winning it just with the way he was doing good times on the track. He has been running with Hayden Wilde and Aaron Pulford and holding his own."

Tanner is one of this year's Pathway to Podium athletes, supported by BayTrust CoachForce, Toi Ohomai Institute of Technology and multiple sporting providers across the Bay of Plenty region.