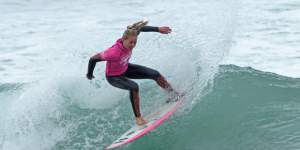 The 15-year-old surfer is the first Kiwi in nine years to reach the podium at the event with her third place finish in the Under 16 Girls Division.

The result has helped New Zealand finish 10th overall, jumping up the rankings five places from 2015, when they finished 15th at the event held at Oceanside Beach, California.

Mount Maunganui's Raiha Ensor could not emulate Tawharu's success and was eliminated in the semifinals of the Under 18 Girls Division, finishing in a respectable seventh place overall.