Mount Festival of Multisport even bigger for 2018 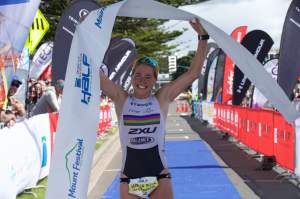 The fourth edition of the Compressport Mount Festival of Multisport is set for 19-21 January with a range of athletic and community events scheduled in Mount Maunganui.

The Multisport Festival is built around the iconic Port of Tauranga Half, presented by Compressport, and this year includes new events - the Enduro and Höpt Soda Aqua Bike, an event for athletes of all abilities - the Under Armour Mount Run, and incorporates community events - The Big Little Markets, Street Food Union and Night Owl Cinema.

Another iconic summer sport, which is part of the festival programme, is the Mt Maunganui Beach Volleyball Open on the Mount’s Main Beach.

The 2018 Port of Tauranga Half is the headline event for the Compressport Mount Festival of Multisport and has assembled New Zealand’s top long distance triathletes for the men’s and women’s race on Saturday, 20 January.

Ten-time race winner Cameron Brown is back, and looking to add an 11th title in an event he last won in 2014. His main competition is expected to come from the country’s rising star of long-distance triathlon, Mike Phillips, who recorded the world’s fastest debut in an Ironman event when coming second at the Barcelona Ironman last September. He backed up this performance with a victory in the Taupo 70.3 event in December.

While this battle between the country’s long-distance legend and rising star give this year’s Port of Tauranga Half plenty of intrigue, other contenders for the title are two-time champion Graham O’Grady, Australian Alexander Polizzi, and well-performed NZ triathletes Simon Cochrane and Dylan McNeice.

This year, Watkinson faces a strong challenge from leading Australian long-distance triathlete – Melissa Hauschildt who is in a rich vein of form after winning the Ironman 70.3 Asia Pacific Championship in November, and the Sunsmart Ironman, Western Australia in December.

Festival Director Lauren Watson says the festival “will be one event which the public can watch or participate in at one of New Zealand’s most popular summer destinations.”

“The Mount Festival of Multisport has something for everyone, from the elite fields in the Port of Tauranga Half, to the Under Armour Mount Run for people of all ages and athletic ability, and for those who just want to soak in some sunshine and sport, there is Beach Volleyball on the main beach”.