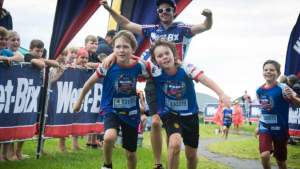 Two hundred Rotorua school children will now get to participate in a popular kids triathlon after a charitable donation by Sport Bay of Plenty.

The initiative will allow Rotorua-based students from low decile schools, who were previously unable to participate due to barriers such as cost and access to sporting equipment, to take part in the Sanitarium Weet-Bix Kids TRYathlon.

The Rotorua Energy Charitable Trust has provided 200 discounted entries to Decile 1-3 schools in the Rotorua region, with entries now allocated to 14 schools.

Sport Bay of Plenty Primary School Sport Director Melissa Gordon said being involved with the Sanitarium Weet-Bix Kids TRYathlon was the perfect fit with the organisation's goal to get more school-aged children active more often, particularly with the event being about participation rather than winning.

"This is a fantastic opportunity to give children from low decile schools in Rotorua the chance to participate in the Weet-Bix Kids TRYathlon," she said.

"These children get a sense of achievement, excitement and huge confidence boost from being involved in such a great event. This is a real chance for them to discover there are events out there for everyone to take part in, no matter what their ability level."

"Our involvement really underpins the opportunity for young people who wouldn't typically be able to afford to have these same experiences as their peers," he said.

"By funding these discounted entries to the Sanitarium Weet-Bix Kids TRYathlon we are able to inspire children to take part in new activities that interest them."

Sanitarium spokesperson Nigel Chenery said the company was delighted to see Sport Bay of Plenty give Rotorua school children the chance to take part in the TRYathlon.

"It's fantastic to see thousands of children every year training for and completing this event, no matter where they live, what their fitness level or sporting ability," he said.

The TRYathlon series, is open to children aged between 7 and 15 years old, and consists of a swim, followed by a cycle and a run.

Participants wanting to register for the 2017-2018 event can visit the website.