Men's Four Nations confirmed for Tauranga and Hamilton this summer 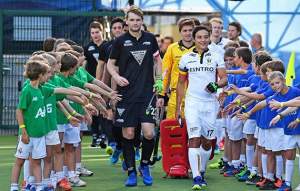 Some of the world’s best hockey teams will hit our shores this summer for the Men’s Four Nations in Tauranga and Hamilton.

Split across two separate five-day series, Blake Park in Tauranga hosts the action from 17-21 January before teams head to Gallagher Hockey Centre in Hamilton from 24-28 January.

The Kiwis will be looking to start 2018 off with a bang as they begin their build-up for the Gold Coast 2018 Commonwealth Games in April.

New Zealand last played Belgium and Japan at the Hockey World League Semi Finals in Johannesburg where they recorded a 2-0 defeat and 3-1 victory respectively.

The Black Sticks will also be looking for revenge against India who came away with a 4-0 win in their last clash at the Sultan Azlan Shah Cup earlier this year.

Tickets for all days of the 2018 Men’s Four Nations are on sale now and start from just $5 through www.dashtickets.co.nz