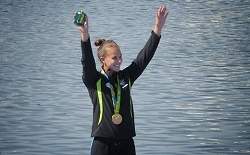 Gold and bronze medals are coming home to the Bay after three Bay Olympians first and third at the Rio Olympics.

Lisa Carrington is now a double Olympic champion is bringing home a gold medal in the fast and furious canoe sprint they call the K1 200m, while Peter Burling and Blair Tuke have secured gold in the 49er race, according to the NZ Olympic Team Twitter feed. Tauranga's Sam Meech has won bronze in the final of the men's Laser.

Carrington's reputation as the Usain Bolt of her sport gained further credence as she backed up her London triumph in the mad dash with another fast-finishing masterpiece in Rio.

It's the first part of what the powerful Kiwi hopes will be an historic double gold medal effort at these Games, with the K1 500m to follow.

The New Zealander looked as though she was up against it as Poland's Marta Walczykiewicz and Azerbaijan's Inna Osypenko-Radomska, the two big threats, bolted through the first 100m right on the Kiwi's pace on the Rodrigo de Freitas lagoon.

It was game on at the halfway point, with conditions ideal for fast racing.

But then, as she does, Carrington stepped it up when it mattered. As those shoulders whirled in an explosion of transferred power, she was able to tap on her metaphorical accelerator over the second half to power clear to a decisive victory.

Carrington finished in 39.864 seconds, well clear of Walczykiewicz who took silver in 40.279 seconds and Osypenko-Radomska who claimed the bronze with 40.401 seconds. Victory was actually comfortable given the sport's rapid-fire nature.

Carrington revealed she knew little about how the race unfolded, including where she was travelling or even if she'd won.

"It's so hard to see. I felt like I was in front when I crossed the line, but I had to wait," she told NZ Newswire.

"It was very cool when my name came up."

Carrington sensed the finish was tight. She switched on the peripheral vision momentarily with 50m to go and could tell boats in the three other centre lanes were hovering.

"I really just wanted to perform awesome today," she told Sky Sport afterwards. "I really wanted it. But I'm just happy to have raced kind of a representation of the last four years, and longer than that. I'm just stoked."