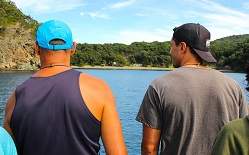 It’s 6.00 am Sunday 28th February and the day has finally arrived; it’s time to get ready for our departure to Mayor Island for the self-leadership camp, a great opportunity for 18 youth from around the Bay of Plenty.

Excitement fills the air as more youth arrive at Pier J/15.  Teamwork will be a big feature of the next five days and we work together to load the boat with luggage, chilly bins, kayaks and snorkelling gear.  Our trusty vessel is the 36 foot catamaran Mata Rua and as the final passengers board we do final head count to ensure we haven’t left anyone behind.

The roar of the two 300 horse power Honda engines begin and a quick glance around the cabin and the deck reveals looks of anxiety and excitement and emotions are running high as we start to pull out of the pier and slowly make our way into the Tauranga Harbour.

It’s 9:45am and 20 degrees; there’s no wind, flat seas and by this point there are a smiles as wide as the harbour entrance on  every face as we pass between Matakana Island and  Mauao into the open ocean and catch our first glimpse of Mayor Island in the distance.

An hour into the trip and you can almost touch Mayor Island  as the silhouette gives way to details – trees, rock formations and caves and soon we pull into the South East Bay.  As I stand at the bow of Mata-Rua admiring the clarity of the ocean I look down I see a 2.5 metre bronze whaler shark just cruising, I look around at a few other staff members who have also spotted the bronzy and being aware to not raising concerns of the youth we keep this little sighting quiet from them – especially considering our next task, jumping from the boat.

After some great team work unloading we hop back aboard the Mata-Rua and head out into the bay and to deeper water.  Three staff have already taken the plunge as an example and I have a few seconds to look down into the water and try not to raise any fears among those youth that have a fear of heights … splash!

One youth goes and then another, then another and everyone else has lined up to jump; clapping, yelling and encouraging each other.  So far so good and no one has backed out.

This sets the tone for the rest of the week, if one refuses to accept the challenge it sets a precedence for the group.