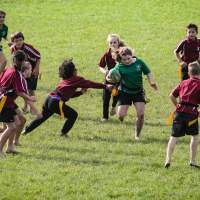 The Maori All Blacks match against the British and Irish Lions in Rotorua will never be forgotten for a talented group of Maungatapu School pupils.

It was not what happened at the main stadium they will remember but the Baywide Rippa Rugby World Cup played next door.

In front of Maori All Blacks and Black Ferns players the pride of Maungatapu went right through five pool games unbeaten, then beat Greenpark School in the semifinal to face off with Kawerau South in the final.

Last year's champions Kawerau were favourites to again represent Bay of Plenty at the national finals in Wellington but no one told the Maungatapu boys and girls that.

In a topsy-turvy final Maungatapu finished strongest to take the game 7-5.

They will now contest the Air New Zealand Rippa Rugby Championship for Years 5 and 6 in Wellington from September 18-19.

Maungatapu made it to the national finals in Wellington back in 2011 when they came third. This time they want to come home as national champions.

Co-captains Manihera Gardiner, 11, and Aaron Riley, 11, are excited to be going to Wellington to represent their school.

"It is really exciting because we get to go on the plane for free but it is not as exciting for our parents because they have to come back down by themselves," Manihera said with a grin.

Playing in front of rugby stars from the Maori All Blacks was a real thrill for the players.

"Damian McKenzie, Otere Black, Matt Proctor and some of the other Maori All Blacks came there to watch us and they signed some stuff for us," Aaron said.

"It was exciting for us because we see them on TV all the time."

He says the final was close right to the end.

"It started off one for one [tries] and then we got a penalty and we ran it back and we scored another try. They kept on scoring and then we would score and then we had one little break and that was how we won."

Maungatapu coach Fabian Herewini is understandably proud of the team.

"The kids listened and gave it their all for this tournament. The trick was letting the kids be themselves and being comfortable in what they do which is having fun," he said. "Nothing can beat that when you have a team that has fun and can be themselves."

He says the five boys and five girls have had great support from the rest of the school's pupils, teachers and from all the parents.

"The best thing to witness is the good sportsmanship these kids have and they are all doing well in class."

They have talked about Wellington and representing every school in the Bay of Plenty but Herewini says they are having a break before the serious training begins.

"We'll just carry on doing what we're doing, having fun and let the kids be kids, but as the tournament in September gets closer we will start knuckling down and get right into training."