Making a Mark in League 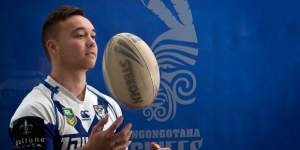 Sport has always been a passion in Reuben Te Kani-Taylor's life.

The Rotorua Boys' High student is preparing to make his mark in the world of league.

The talented 18-year-old is moving to Australia at the end of November to play for the Canterbury-Bankstown Bulldogs under-20s squad and develop in the hooker position.

The Bulldogs, based in Belmore, boast a professional side that competes in the National Rugby League (NRL) premiership, as well as New South Wales Rugby League junior competitions.

Te Kani-Taylor signed a contract two years ago but insisted on finishing his education first. He will study an electrical apprenticeship alongside developing in the under-20s squad.

"This is the best move for me," he said.

"But I wanted to finish school first. Education is very important to me and it's there as a back-up plan. I think it's vital to have other skills alongside playing sport."

The former Chiefs under-18 player admitted he was nervous to be making the move but was excited for his adventure.