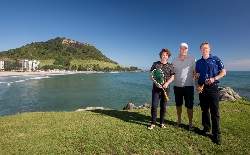 The best young squash players on the planet are heading to Tauranga next year, with the Bay of Plenty city awarded rights to host the world junior championships.

The World Squash Federation (WSF) event will be held from July 19-28, 2017, featuring 250 of the best under-19 players in the world, and will also incorporate the women's world junior team championships.

It's the first time since 2006 that New Zealand has hosted a world junior squash event and Squash New Zealand chief executive Jim O'Grady believes it's a major coup.

"These junior championships set the tone in the world game for years to come and it's hugely exciting to be able to bring them to these shores," O'Grady explained. "We expect significant benefits, not just for the sport in New Zealand but for the wider Oceania region as well."

It's also the biggest international sporting championships to be held in Tauranga, with a portable glass court and live-streaming to be used to showcase the city.

Organising committee chairman Wayne Werder was delighted with the announcement, which was the culmination of nearly 12 months' work.

"This is a big moment for both the sport in New Zealand and Tauranga as a sporting destination," Werder said.  "Our aim is to inspire a whole new generation of top squash talent in New Zealand, while also showcasing our beautiful city to a worldwide audience."

The championships will be jointly hosted by the Devoy Squash & Fitness Centre in Tauranga and the Te Puke and Mount Maunganui clubs, although organisers will also unveil an innovative glass-court location in the buildup to the event.

A glass court was last used in Mount Maunganui's Bayfair shopping mall during the Mount Festival of Squash from 2008-09.

Squash has a long, proud history in New Zealand and two of the legends of the sport have strong Tauranga links.  Dame Susan Devoy, four-time world champion and now the race relations commissioner, has lived in the city for a number of years while 1986 world champion Ross Norman has family based in the region.

"Squash is thriving here in Tauranga with great facilities, passionate volunteers, and a number of experienced past international players who know what is required to host an event of this scale," Devoy said.

Norman was just as effusive, noting the value of the tournament for the development of the game.

"The championships are an important stepping stone for up-and-coming players before they take on the senior ranks and also an event where friendships are made for life," he said. "It is fantastic to see Tauranga named as the host."

This year's world junior championships will be held in August in Poland, with 26 nations represented in the team competition alone.  Tauranga mayor Stuart Crosby said next year's championships are further proof of the city's ability to host major events, following on from the success of the annual NZCT AIMS Games, the ANZ International Cricket Series and the ENZED UIM Jetsprint World Championships.

“International sport events play a key role in creating a city with heart and soul, a city of great spaces, places and environments, and a talented and innovative city full of opportunity," Crosby said. "They support us in showcasing our city locally, nationally and internationally and they bring community pride. We look forward to working with the organisers to deliver a top-notch event, and to welcoming all these athletes from around the world to New Zealand and the beautiful Bay of Plenty."