Magic too strong for Vixens 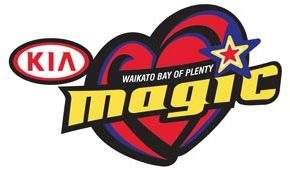 Waikato-Bay of Plenty Magic reprised their trans-Tasman netball league winning effort with a hard-earned 56-51 victory over Melbourne Vixens in Hamilton.

The Magic took out the ANZ Championship grand final by three goals in Melbourne last year, and repeated the dose on Sunday to consolidate fourth place on this year's ladder.

They now sit on the same points as third-placed Melbourne, and are just two goals astray on goal difference.

Both teams scrambled for consistency in a match characterised by a huge defensive effort right through the court.

Especially in the opening quarter, the Magic struggled to shake off the Vixens' tight one-on-one marking, forced into handling errors and rushed play by constant pressure on the ball.

The Australians also continued to attack strongly in the front third, with goal attack Tegan Caldwell opening up space for shooter Karyn Howarth as well as showing good vision on the long feed.

But with goal shoot Irene van Dyk disciplined in court work and circle movement, and shooting as accurately as ever, the Magic edged out to a narrow 13-12 after 15 minutes.

They maintained pressure in the second spell, opening out a five-goal lead midway through the spell before the Vixens stormed back on the back of couple of key Bianca Chatfield turnovers.

Chatfield's combination with Geva Mentor in the defensive circle was superb, rivalled only at the other end by the work of Silver Ferns Leana de Bruin and Casey Kopua as the Magic extended their lead to 29-26 at halftime.

The strong defensive effort continued in the third quarter. The Magic opened out a six-goal lead early on, the Vixens' hardworking midcourt combination of Madison Browne and Elissa Macleod sparked a comeback to haul back the deficit to 40-38 at the three-quarter mark.

CLICK HERE to read the story on Big Pond News