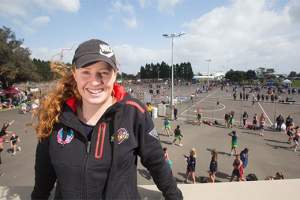 It's been eight long years since Magic netballer Sam Sinclair was last at the NZCT AIMS Games and while much has changed, some things haven't.

Sure, there are now double the amount of athletes at the Tauranga-based games - up to a record 9300 this year - and the 21-year-old's netball career has soared since her appearance for Rotorua's John Paul College in 2008.

But the excitement of the tournament hasn't changed a bit… and neither has the John Paul coach, Coral Palmer, who now coaches Sam's younger sister Molly.

"One of the questions asked was if Mrs Palmer was as tough on me as she is on the current team and the answer was a definite yes," says Sam.

"She's very tough but she will also help you win and make you a better player!"

With 1344 netballers from 112 teams, the AIMS Games now hosts the largest netball tournament in the country, at any level.

But it wasn't the scale of the event that Sinclair remembered from her own playing days - more the way her team pulled together.