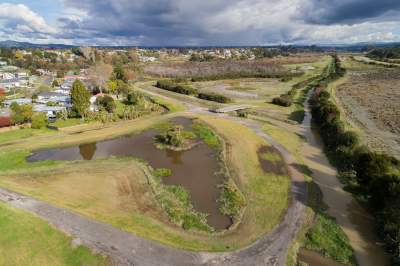 Tauranga City Council and Western Bay of Plenty District Council have both been recognised for their contribution and dedication to the recreation sector at the recent New Zealand Recreation Association Awards.

The NZRA Awards were presented at an awards dinner recently at the TSB Showplace, New Plymouth during NZRA's Recreation Conference.

The recreation industry encompasses the people, places and organisations that enable these experiences to occur and the NZRA Awards honour the people who are integral to making New Zealand a world leader in recreation.

TCC won a Merit Award for Kopurererua Park in the Outstanding Park Category, while Peter Watson (Parks and Reserves Manager at WBOPDC) was awarded a fellowship for his 36-year dedication to the parks and recreation sector.

Peter Watson was made a Fellow of NZRA for his commitment to the sector, working across parks and facilities in New Zealand. Peter was involved in the establishment of the Hamilton Gardens and has been part of a number of award winning teams over the years. He was instrumental in forging stronger relationships between council and local iwi and has been a member of NZRA since its creation.

Merits in the Outstanding Park category were given to Kopurererua Valley, as well as Otari Native Botanic Garden & Wilton’s Bush Reserve, while the award winner was Auckland Botanic Gardens, which spans 64 hectares and is home to more than 100,000 plants from around the world. With hard work and creative thinking, it has seen visitor numbers increase from around 365,000 per annum in 2005 to 1 million in 2016.