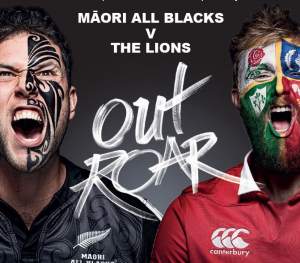 With 17 June fast approaching, Rotorua is counting down the days until the Bay of Plenty city plays host to the fifth match in the 2017 DHL NZ Lions Series.

The sold-out match between the Maori All Blacks and The British & Irish Lions will be held at Rotorua's International Stadium on Saturday 17 June, starting at 7.30pm.

During the week prior, in the build-up to the big game, there will be a number of scheduled community events and activities happening around the city.

Aside from the match, one of the main attractions is the International Rugby Club’s Giant Haka event, an attempt to break the Guinness World Record for the Largest Haka and surpass the current record held by the French. The attempt begins at 12pm on game day (17 June) at the Rotorua Lakefront Village Green, with entertainment from 10.30am.

You can brush up on your haka skills in preparation here:

Other lead-up events include the Tima Tangata Exhibition (from 14 June), Rotorua Night Markets (15 June), and the Matariki All Stars Parade (16 June).

Click here for full details, as well as match transport and parking.