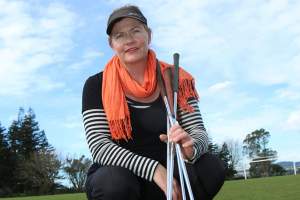 Golfers will tell you it's one of the great sensations in the sport – right in the sweet spot, two grooves up from the leading edge, smack in the middle of the clubface.

That probably wasn't quite Joanna Thomason's first experience on the golf driving range with a 7-iron at Sport Bay of Plenty's Spring Starter Series for Women – a project connecting women with a series of low-cost sporting activities. “

However I managed to hit a few good ones,” says the Tauranga Girls' College health and physical education teacher.

And it was certainly enough to bring her back for lesson two of six with Omanu Golf Club professional Mikayla Bell. “They provided the clubs and the balls, and the driving range – that makes it easy. You don't have to go out and buy or hire anything first.”

And if it's a sport you aren't sure about, whether it's really what you want to do, then Joanna says this is a good economic way of testing it. “And I probably wouldn't have done it had the Starter Series not placed the opportunity in front of me. So easy and a reasonable cost.”

It was $75 for six lessons. “Some people pay that for one lesson with a good pro.” Or two sessions with a private trainer at a gym.

Joanna browsed through some of the Spring Starter promotional material and, with a couple of work colleagues, chose golf. She hadn't swung a club since she was about nine when her dad dragged her down to the local golf club.

“I am a tennis player but I have always had an interest in golf. Both my children have left home so I have some time on my hands.”

So when the Starters lined up at the driving range at Omanu, Joanna was the only lefty. That was never a hindrance for Sir Bob Charles or Phil Mickelson.

“But you are with a bunch of women who are the same level, the same ability, you don't feel intimidated.” So the Spring Starter Series is a concept that Joanna recommends.

“Saying that, I discovered golf isn't easy.” Apart from trying to connect a 42.67 mm diameter ball with a clubface she has two sore elbows. “I must have been using weird muscles that I don't normally use.”

And even though she's enjoying her connection with golf, it's too early to say if it's her game. But the Spring Starter Series is about giving something a shot.

Registrations for the Spring Starter series have closed, but Sport Bay of Plenty has lots of other low-cost activities coming up through Play in the Bay.