Tomorrow's Schools Today NZ recently caught up with All Black Rieko Ioane and Black Fern Selica Winiata to discuss how childhood play helped them develop the skills for their professional careers.

Two of NZ’s biggest sporting stars say freedom to play as children was one of the key elements in the successful development of their international rugby careers.

“I’m a firm believer of just playing and how it develops you as a kid,” All Blacks star Rieko Ioane says.

Ioane says he developed his evasion skills playing spotlight, go home-stay-home and dodgeball with his big brother Akira and a bunch of local kids on the streets and playgrounds of their Mt Eden neighbourhood.

“Trying to not get tagged or get a ball to the face is a big one!” he says. “Obviously learning how to catch the ball in dodgeball is big, and probably speed you know, trying to get away from being tagged or being ‘in’ is probably what I still use today. 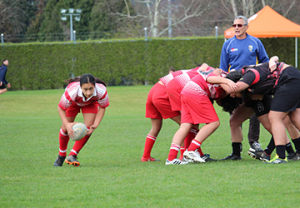 “There’s the social side too – learning how to cooperate with teammates and enjoy the game as best you can.”

Ioane says these experiences are a far cry from how kids learn to play sport these days.

“I see my young cousins and there is a lot of structured coaching. I’m not saying that is a bad thing at all, but there needs to be room for play. I obviously prefer less structure and would just go down to the park and kick a ball with my mates. I liked the freedom side of things and learning from experience rather than just learning from being coached. I think that was probably the best lesson I got out of playing,” he says.

Black Ferns star Selica Winiata agrees and says it was her freedom to play whatever she liked as a youngster that helped her develop the skills she uses on the field today.

“Kids have got so many years ahead of them, you don’t want them burning out at age 13 and 14 and no longer enjoying the sport. So let the kids be kids you know, let them play big. It doesn’t matter if they make mistakes, that’s actually how they find their feet and rectify it in the next game.

“My advice to parents is don’t get hung up on getting the best coach there is in New Zealand to come and coach your kid at such a young age, let them play, find their own feet and their own ways of training. Back when I was a kid my parents just encouraged me to play, and one of the games we used to play as a family was padder tennis,” she says.

Whether marking out a court in front of her house with chalk or heading down to the local primary school, Winiata would be out there with her mates, swotting away with miniature bats.

“We used to play doubles quite a bit and straight away, you know, it’s teamwork – the communication between each other because if you don’t know what each other is doing on the court it’s unlikely that either of you will hit the ball,” she says.

That appreciation of teamwork would help the fleet-footed fullback as she pursued her dream of playing for the Black Ferns and winning a world cup for the New Zealand.

“Communication is huge in the game today, especially playing team sport. Everyone has to be on the same page.”

Padder tennis also helped hone Winiata’s competitive streak. At her school in Manawatu there were two sets of bats – one plastic, the other wooden. The wooden bats were better, and the winner got to keep them until they were defeated.

“As you get to the top level you know performance is a big thing and everybody is trying to edge out other players and how can I be better than them. But when you’re young you shouldn’t have to worry about that, you’ve got so many years ahead of you to become the athlete that you want to be, but you’ve got to be able to go out and enjoy yourselves and express who you are out on the field because that’s what brings the X-factor.

“My recommendation for young kids is to go out and just play big. Dreams are free. It’s a time that you can just express yourself in so many different sports. That competitiveness will slowly grow and your time will come once you get older,” she says.

Their inspiring childhood memories are now recounted on collector cards found in Weet-Bix wheat biscuits packets as part of the breakfast cereal’s Play Big campaign – an initiative that encourages Kiwi kids to develop their skills through everyday play.

David Niethe, Mental Performance Coach, says it is vital for children to have free sport play. “The “Good Ole Days” when mum or n.ana told us to go outside and play and not come home ‘til dinner time were probably most memorable for many,” he says.

“Having fun, getting out in the fresh air, on the bikes all day, mucking about in the mud and enjoying time with friends definitely gets the endorphins going and makes for wonderful memories.”

“You fall down, you get back up,” says Niethe. “Kids learn at a young age and it helps to develop the neuro-pathways and through this we develop skills, we become creative in play and imagination is stimulated.”

Niethe says too much structured sport at a young age can sometimes mean children can struggle to cope with the high level of expectation from parents, coaches and clubs with a focus on winning, when the focus needs to be on developing skills and having fun along the way.

“Encouraging young kids to learn through play, to take all the learnings from failure, is the key to success and a life skill. They tap into their own creativity and through this process discover talents and abilities, whether it is passing the ball, kicking the ball or the ability to work at timing, for example in tennis, squash, or cricket.

“Being free to play helps inspire self-discovery. It teaches us imagination, creativity, flexibility, communication, team play and strategy. You discover your talent through play,” Niethe says.

Niethe says Rieko Ioane developed his evasion skills from a young age while playing spotlight and dodgeball. “He was consciously aware of all the new moves and tricks that he was doing at such a young age and he was getting the results whilst having fun.

“Today he implements these same moves from childhood memories into his professional games. This comes from being unconsciously competent, he trusts within himself the decisions that he makes he doesn’t have to second-guess each move,” he says.

Go home-stay-home, spotlight, hide and seek and blindfolded tag are just some of the games played which honed the skills of the boys and girls who would become today’s All Blacks and Black Ferns superstars.

Other Black Ferns to feature in the campaign include world cup final hat-trick hero Toku Natua, who discovered she was hard to tackle during a tackle version of tag at family barbecues in Tokoroa (“Even the boys had a hard time stopping me! It gave me heaps of confidence.”); Eloise Blackwell chasing sheep around on Great Barrier Island; and Portia Woodman’s epic, obstacle-ridden games of Go-Home Stay-Home on the Ngawha Marae.

The All Blacks childhood memories featuring in the series include Sonny Bill Williams and his siblings using a trampoline as a base for Go-home Stay-home, Beauden Barrett’s games of cops and robbers with his brothers on the family farm in Taranaki (“That’s where I first developed my acceleration and footwork.”); Israel Dagg hunting endlessly for his brothers up trees on the farm in Gisborne; and Ardie Savea chasing big brother Jules around the fields of Rongotai College playing octopus.

Sport Bay of Plenty is proud to run the GO4it programme: a comprehensive fundamental skills programme that focuses on key skill sets that develop lifelong skills required to participate in sport and recreation for life.

Find our more about GO4it