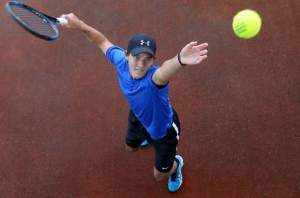 Hard-working 15-year-old Corban Crowther was runner up in boys' singles and doubles at the U14 NZ National Championships this year.

Then, he entered a grade 2 tournament in Benidorm, Spain where he was seeded eighth. In undoubtedly the performance of his career, Corban defeated three Spanish players and a Briton to make the final against the top seed from Spain.

The early momentum went the way of the Spaniard, but Corban fought back to beat the local in front of his home fans. The career-defining victory saw his European junior ranking go from 228 to 121.

Here's a quick Q&A, thanks to Tennis NZ:

Favourite moment so far in your tennis career

If you could travel anywhere in the world right now, where would you go?

What is the funniest thing you have seen on the tennis court?

Someone snap a racquet

What are you most scared of?

What is your favourite pre-match food?

What areas do you feel that you need improvement in?

Consistency in a rally and speed around the court

If you could compete another sport what would it be?

Who is the person you most admire?

Do you play other sports? If so which ones?

What do you do to calm your butterflies while you compete?

Have fun and stay focused

Play in the French Open, be able to Slam Dunk, run a Marathon, learn the French language.

What is your greatest tennis accomplishment?

Making the Junior Davis Cup Team to go to Malaysia this year.