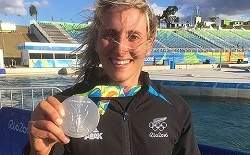 Tauranga's Luuka Jones has created history with a silver medal in the K1 canoe slalom at the Rio Olympics. It's New Zealand's first medal on the Olympics whitewater.

It represented spectacular progression from Jones who finished 14th in London in 2012 and 21st in Beijing in 2008.

Jones, the 27-year-old from Tauranga, belied her world ranking of No 28 with a storming run.