It's time to Push Play - Again!

Physical activity levels dropped significantly in the first year of COVID-19 with adults doing 16% fewer hours. New research from Sport NZ’s Active NZ survey shows that while physical activity rates have rebounded to some degree, it isn’t happening across the board with some New Zealanders still struggling to get back into the swing of things.

The survey also shows that motivation is still proving to be a key barrier, so the campaign focuses on encouraging kiwis to make the most of local, affordable ways to stay active – without putting a number on how much activity is enough.

Sport NZ Chief Executive Raelene Castle says it’s not about what activity you do, or for how long - just take any opportunity to move, more often.

“We’ve seen physical activity drop during COVID-19. Now that there are more freedoms, people are getting back to it – but some groups are still doing less, and we want to see that change.”

“Young people are still not as active as before and people in hardship are more affected. We want to encourage all New Zealanders to take a step towards more activity for all the benefits it can bring – physical and mental – and simply in many cases for the fun of it.” 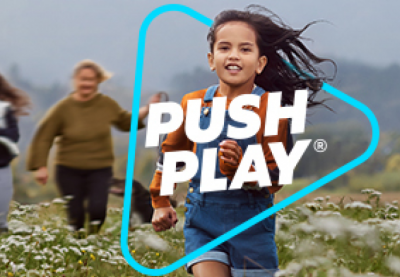 Sport Bay of Plenty Chief Executive Heidi Lichtwark says physical activity plays a critical role in wellbeing, and any form of activity can be key to countering the stresses of the last couple of years.

"For some people reconnecting with their local sports club may help them get back into a routine, and for others it may be catching up with friends and taking a walk around a local park. All movement counts."

The Push Play campaign features three families in which tamariki take the lead role as coaches and personal trainers to the adults in their lives. Movement is depicted as anything that gets you physically active, and even better if that’s outside in nature. It can be recreation-focused, formal or informal sport or even just playing. Anything counts!

Sport NZ, together with academics from Victoria University of Wellington, conducted the study following a series of surveys of between 2,500 – 4,500 adults, 18 years and older. The surveys were conducted between April 2020 and April 2021. Key findings:

Explore ways to get active in the Bay of Plenty