It's a kind of Magic for netball team 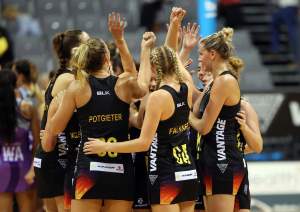 The Magic have made their mark in the new ANZ premiership with dominant wins over the Tactix and the Stars in Round One.

With five players debuting for the Magic this season, and an average age of just 22, the team has a remarkable mix of up and coming talent and international experience.

Potgieter says she is relishing playing in the ANZ Premiership, coming up against experienced internationals and numerous Silver Ferns, and getting to play top level netball every week.

“The Magic are my new family, and I am so excited to be out on court with these amazing players.”

Captain Casey Kopua brings key experience to the defensive end making a strong return to professional netball after the birth of her daughter.

Kopua and young Silver Fern Kelly Jury have been outstanding in defence. The dynamic defenders have incredible reach and their strong presence over the shot continues to disrupt their opponents.

The Magic are facing off against the Pulse this Wednesday, 5 April 7.40pm at the Energy Events Centre Rotorua. Coach Margaret Forsyth says the team has created a strong culture of performance and are looking forward to their first home game in Rotorua.

“The team always loves the opportunity to come home to Rotorua and take the court. Rotorua fans have always been supportive and the crowd backing really spurs the girls on.”

The Pulse are coming off the back of a tight one goal win over the Mystics in Round 1 and will be looking to continue their winning ways. Kopua acknowledges the clash will be intense as both teams aim build on their form for Round One.

“The Pulse have always been tough opponents and you can never underestimate them”.

The Magic still have five home games in Rotorua, Hamilton, and Tauranga. Tickets are available from Ticketmaster.co.nz and Ticktek.co.nz