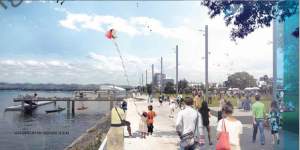 A vision for the future of public spaces in Tauranga's city centre has been reactivated because of fears the CBD could be overwhelmed by the speed of change.

The 2015 plan has taken on new significance after a series of announcements including construction of a new civic administration building, a university campus, a 12-storey student hostel, private and public carpark buildings and apartment complexes.

The council's City Transformation Committee has agreed to update the draft plan which sets the framework for the future look and feel of the city centre. It included a stadium and sports precinct on The Domain and a 5km "green necklace" walkway skirting the perimeter of the city centre between Elizabeth St and Marsh St.

"When you are planning for change, you have got to know where you are going," Mayor Greg Brownless said.

Mr Brownless said the council could not go wrong preserving green open space, although he hoped the green necklace would not become a green chain.

The plan contained seven focus areas including the green necklace, civic heart, the avenues to headland north-south roads, and the harbour to harbour east-west roads.

Work on the civic heart was already under way through the rebranded and expanded Heart of the City project. Hamilton St was planned to become a "green link" from The Domain to the waterfront, with pedestrian-friendly streets around the planned civic campus.

Click here to read the full article from the BOP Times.