I Proved Selectors Wrong in Rio 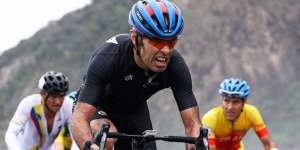 When the NZ Paralympic selectors decided to not select Fraser Sharp for Rio it seemed like the world had stopped turning for the Tauranga road cyclist.

But giving up has never been part of the makeup for a guy who has lived by the adage of "anything is possible" since he suffered a near fatal head injury in 1993 while out riding his bike.

He hoped he would somehow get a reprieve and the decision to not let Russia compete opened up a late call-up to Rio for Sharp.

The 40-year-old took his opportunity despite a lack of preparation time to finish eighth in the C3 Time Trial and 11th in the C3 Road Race.

"We only arrived in Rio three days before the time trial because the whole thing was so rushed for us. It was better that we spent longer in Beaumont in Canada in quality training than being in Rio earlier," Sharp said.

"When the race finally arrived I was just focused on that. I was feeling some pressure on the inside but it all happened so fast. If I had blinked I would have missed it.