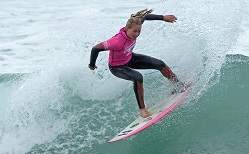 Mount Maunganui surfers have enjoyed plenty of good times at past Billabong National Surfing Championships but their performances at the 2016 version held at St Clair Beach, Dunedin, were top class.

The teenage female surfers took out the individual honours with Elin Tawharu and Kea Smith contesting three female division finals on Saturday in the open women, under-18 women and under-16 women categories.

It was as much a test of endurance as anything for the pair, who endured a massive day of surfing in 2m swells.

In the open women elite division, Smith - at 15 the youngest to make the final showdown - put up quite a battle before Ella Williams from Whangamata claimed her first national title.

Tawharu, not surprisingly, tired in the open women's final after claiming two age-group titles, with Smith a close second in each. Tawharu's first final was the under-16 division where she defeated Smith, with Zhana Hutchieson (Taranaki) third and Tiana-Breeze De Mooij from Mount Maunganui fourth.

In the under-18 final it was a clean sweep for the Mount, with the same Tawharu and Smith one-two and Raiha Ensor third, with Billie Scott (Whangarei) fourth.

There was plenty of other success for the Mount team.