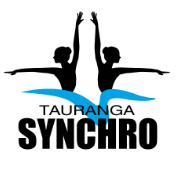 Just as the Chiefs benefited from playing in front of a home crowd at the weekend, so too did the Tauranga Synchronised Swimming Club’s swimmers as they hosted the North Island championships at Baywave at the weekend for the first time in 5 years.  The swimmers continued to break records for the club – and helped to achieve their best ever North Island’s results.

The Dolphin team aged from 7 to 11, consisting of Karlina Steiner, Marcie Glaholm, Aisha Lowe, Caitlyn Hopping, Mia Burgess, Poppy Lowe, Piper Rudkin, Talitha McEwan and Carla Roberts competed in their first competition ever and achieved a second place with their Chicken Dance theme choreography. “Since the beginning of this year we decided to start enrolling girls from the age of 7,” said coach Julieta Diaz.  “We are really lucky to have a beginner’s team with girls that are coming from others sports related to Synchro like Swimming, Gymnastics, and Ballet. They are young talented athletes with a good set of skills. I am looking forward to see how these girls develop into strong synchronized swimmers and possible representatives of New Zealand.” Coach Julieta Diaz says.

The 12 & under age group category was represented by Maya Lowans, Eden Worsley, Dannika Worthington and Zyleica Smith. For Zyleica and Maya, aged 9 and 10, it was the first time competing in this category. They have shown they are ready to compete in this category, achieving a well deserved bronze medal with their Arabic dancing style duet. “They are a good match for a duet, they are both really serious about Synchro,” coach Diaz said.  For their teammate Dannika, it was the second time in this age group. The experience she built up last year paid off, achieving three silver medals this year for the club in Figures, Solo and in Duet with her partner Eden. For Eden it was her first competition since she started Synchro last year and she was already able to fully keep up with the more experienced swimmers winning third place in figures.

The Aquanaut category also held Tauranga representatives, Maddi Toft, Eden Worsley and Coleen Fahy.  This was their first competition after starting synchro a year ago. Maddi placed 1st in Figures and took the gold medal in the Trio, together with Colleen Fahy and Eden Worsley.

The 15 & under category was well represented by Eva Morris, Jazzlee Thomas, Dannika Worthington, Amy Lowans, Isobel Pettit and Colleen Fahy.  Jazzlee Thomas and Eva Morris have shown yet again that they are unbeatable in this age group. Jazzlee Thomas took the first place with a solo routine performed with style and excellent technique to the rhythm of a powerful Beyonce song.  She joined forces with her “BFF” (best friend forever) and duet partner Eva Morris to demonstrate to their opponents how much hard work they put into every training, and why their Mika routine was worth a solid Gold medal. Isobel Pettit and Amy Lowans took a noteable 4th place with their duet choreography, swimming for the first time in this age group. They both also performed in the Tauranga 15 & under Team together with Colleen Fahy and Dannika Worthington adding another silver medal for the club.

In the demanding Junior category the club was represented by Jazzlee Thomas and Eva Morris. “I wanted to make it hard for them and even when they are still young for this category I made them test themselves against older and more experienced swimmers like the NZ Junior representative Rose Stackpole from Auckland,” coach Diaz said.  They were clearly up to the challenge with the duet taking the gold medal and Eva Morris placing second behind Stackpole in the Junior solo with a really catchy and artistic performance with jazz music from the Chicago musical.

Sarsha Younger has once more represented Tauranga Synchro in the Open category, showing that she wants to go for more after competing and representing NZ in Australia early this year. “Her scores were better than in Australia which shows us that her routines are improving and heading in the right direction,” coach Diaz said. Younger placed 1st with her technical and free solo and she has to work intensively in the next 10 weeks to master these two routines to achieve NZ representation for Oceania’s championships 2014.

In the InterSchool competition, Tauranga Girls’ College swimmers Eva Morris and Janaya Worthington placed a very close second for their duet, and Janaya went on to place third in her solo.  Bethlehem College, who have a very strong group of swimmers in the club this year took 1st place with their Intermediate Trio swum by Maya Lowans, Maddi Toft and Eden Worsley.  In the Intermediate Solo, Dannika Worthington placed third, as did Sophie Ning and Larissa Wilson from Aquinas College – with the most vocal crowd support in that particular event..

“After analyzing the results it is impossible to define a hero for this competition, all the girls have been amazing in their performances. Our older swimmers have shown that the club is in very good heart. Of course for this group the cherry on top was to win Gold for the first time in Open Team Combination - swum by Janaya Worthington, Larissa Wilson, Sophie Ning, Sarsha Younger, Eva Morris, Jazzlee Thomas and Amy Lowans. If everything goes well and we repeat this result at Nationals in 10 weeks, we will qualify to represent NZ at Oceania’s Championships. Our youth and beginners team have shown that the club has the raw material to carry on with the legacy that our top swimmers started building over the past two years,” coach Diaz said.