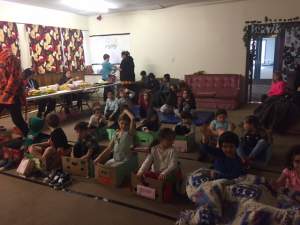 They say laughter is the best medicine, and for the families of Edgecumbe it provided much-needed relief in a time of crisis.

When the April rain came and the Bay of Plenty town was flooded, submerging the town and forcing residents from their homes, no-one would have predicted how important movies, arts and crafts, and active games would be in their lives.

Ahead of the Easter holidays, a school holiday programme was established to alleviate some of the pressure on local families, a collective initiative between Sport Bay of Plenty, East Bay REAP, Whakatane District Council, Te Puna O Mataatua, the library and numerous local helpers.

For just a gold coin donation, families could drop their children off for the day and have them entertained with have-a-go sessions, dance classes, creative arts, movies and much more.

“It give parents a place to send their kids while they are getting things done and just take off some of that pressure in one area of their lives, which is great.”

With Edgecumbe a no-go zone and the War Memorial Hall occupied by disaster relief, the programme was set up in near-by Whakatane. The demand was so huge that a second holiday programme was held in the Term 2 holidays in Edgecumbe and a third is planned for the upcoming September holidays.

It was huge – in the most recent programme, most days would see up to 50 children take part, 7.30am to 5pm, five days a week.

“One day we had 63… it was bedlam! We would be counting down until the doors closed!” says Sport Bay of Plenty Community Sport Advisor Vicky Richards with a laugh.

“Sport Bay of Plenty put the call out asking who could help and it was really cool to see all the providers come together. It was awesome to have so much support. We are so lucky to have a few agencies who know holidays are coming up and have people allocated to make themselves available.”

Vicky and her family were directly affected by the floods and she has been instrumental in helping get the community back into activity. As such, she has recently taken a 11-month secondment from Sport Bay of Plenty to take up a role with Whakatane District Council as a ‘Navigator’, working to support flood-affected families of Edgecumbe. Karen has now taken over Vicky’s role as Community Sport Advisor.

Sport Bay of Plenty is also working alongside Edgecumbe College to undertake a review of sport in the school. With much of the infrastructure damaged in the flood, many clubs have lost the support they require and it is Sport Bay of Plenty’s aim to help get the school and in turn the community back on their feet.

The review will look at the past and current state of sports clubs and opportunities, and work with the community to help establish and maintain these for the long term.

“How can we make it a better fit for everyone going forward? That’s our main goal,” says Karen. “It’s a lot of background work, but will make a -huge difference in the long run. It’s a new opportunity.

“Despite the sheer disaster of it all, there are positive things that come out of tragedy, and that’s what we want to focus on building.”