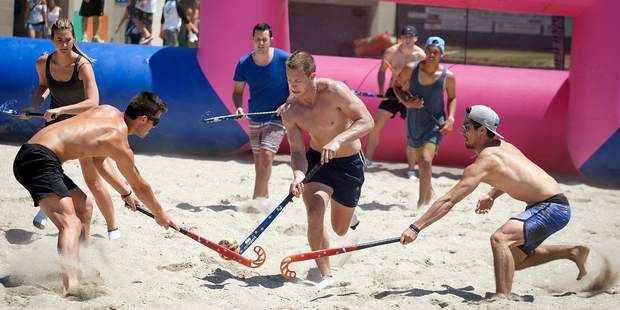 Swimmers and sunseekers got more than they bargained for at Mount Maunganui's Main Beach on Saturday.

On show were two spectacular beach sports that have every chance of becoming mainstays during future summers, judging by the how well received they were.

The second National Beach Hockey Championships and the inaugural Beach Rugby 5s took place on specially marked playing areas beside each other.

The beach hockey continued yesterday and attracted a host of top Midlands men's and women's representative players, who took to the sand-based version with ease.

One of the celebrity players invited to take part by organiser Jason Niles was Black Sticks midfielder/defender Nick Haig.

He was part of the New Zealand team that made the final of the inaugural Hockey World League in India last week.

Haig said he liked the skills involved with beach hockey and said it was an ideal fit for a place like Mount Maunganui.