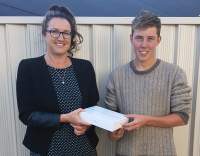 Triathlete Hayden Wilde has been publicly voted as The Hits People's Choice Award winner, ahead of the 2017 Bay of Plenty Sports Awards.

In the lead-up to the prestigious awards ceremony, the finalists in the Junior Sportswoman and Sportman categories were also put forward to a public vote for The Hits People's Choice Award, in which the chosen athlete would take home a $200 voucher for Canterbury Clothing and one lucky voter would win an Apple iPad, powered by Vodafone.

With more than 600 public votes, the competition was tight, but it was Hayden who took the top honour.

Kelly Ennis was the lucky winner of the Apple iPad, and the two met on Thursday morning so Hayden could present Kelly with her prize.

Click here to listen to Hayden's interview with The Hit's radio host Will Johnston.

"It is such an honor to win the People’s Choice Award" says Hayden.

"Thank you to everyone who voted, you guys are awesome."

The 2017 Bay of Plenty Sports Awards are held on Friday, November 24 at the Energy Events Centre, Rotorua. Keep an eye on the Sport Bay of Plenty Facebook page for photos and results from the night.