Having a Ball while Playing Basketball 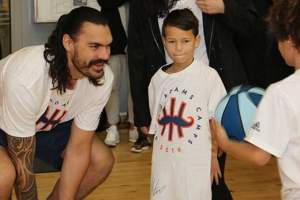 Hundreds of young Bay of Plenty basketballers got the opportunity of a lifetime to get up close to Kiwi professional basketball player Steven Adams.

The NBA star was in Tauranga for the Steven Adams' Training Camps which gives young people, aged seven to 17, the chance to learn individual and team fundamentals from Adams and his Oklahoma City Thunder teammates and coaches.

“It was a fantastic success, we had a whole bunch of happy kids and lots of smiley faces today,” says Zak.

“Steven loves these camps, if it's got kids and education he's behind it 100 per cent. He's also really happy to have his OKC teammates Nick Collison and Andre Roberson and the team's general manager along with him in support.

“One of the most exciting things for us too was we had coaches from the Tall Blacks, Breakers, the Bay of Plenty region and the NBA.”

Zak says at the heart of these camps is the goal of engaging young people and encouraging them to play basketball.