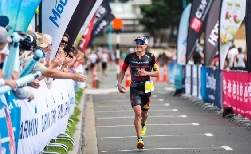 Braden Currie has overcome a two-and-a-half-minute deficit to win the Port of Tauranga Half Ironman.

But has Currie, now a two-time National Long distance champion, left his run for Olympic qualifying too late?

Currie's Tauranga triumph caps off a stunning 12 months for the Wanaka-based adventurer.

After victories in Taupo, as well as the Coast to Coast again, plus a second placing in the World Xterra Championships, he now wants a crack at Rio, even though he's never competed before over the much shorter Olympic distance.

"You know it's a big goal and it's going to be a huge focus towards it, and it opens a few more eyes and windows hopefully. So yeah, it's a good start."

Currie, though, didn't quite get the start he wanted this morning. He was third out of the water, 33 seconds behind Matt Franklin and Mark Bowstead, with Bowstead extending that lead to two-and-a-half minutes after the 90-kilometre bike leg.

"I got off the bike and thought, 'Oh maybe I pushed a little too hard,' but I came right after five kilometres the cramps sort of went, so I can't complain," says Bowstead. "Just had to do my thing and Braden's got an amazing turn of speed."

Yet Currie was struggling mid-race and was wondering if he could finish.

"It was a hard day at the office to be fair," says Currie. "I felt like pulling out halfway through the bike ride as it wasn't happening for me."

But how things change – once Currie got off the bike, he quickly wiped out the deficit, nine kilometres into the 20km run.

"I knew that Braden was going to be so tough to beat," says Bowstead. "I tried my best and he just running, amazing. He's a class athlete."

Currie's next event is a sprint triathlon in Kinlock. His winning margin today was one minute and 34 seconds.

But Bowstead was able to beat for the first time his long-time idol and 10-time Tauranga champion, Cameron Brown. The 43-year-old Kiwi legend is still good enough for third.