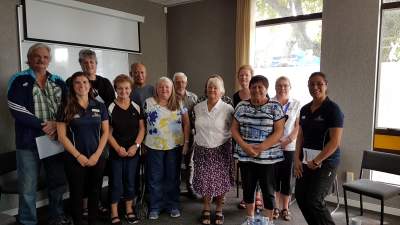 Brenda Somerville’s health and fitness journey began 25 years ago, when her doctor informed her she was at risk of having diabetes.

“What is that?” she thought.

With a lack of knowledge and understanding around what was required of her diet and exercise, and with fewer resources than there are available today, Brenda (now 75) was unaware of changes she could make to her lifestyle – and was diagnosed with type two diabetes.

A busy mum, who says her own health often took a back seat to the wellbeing and care of her children, over the years Brenda’s blood sugar levels continued to rise, and she struggled to keep them in check.

But in October 2017, she took action when her doctor gave her three months to control her levels – or she was going on insulin.

‘Golly” Brenda thought, “I don’t want to go there”.

Brenda made radical changes to her diet through the book What The Fat? through understanding better the portions and types of foods she needed to eat.

She also joined the Green Prescription (GRx) programme, where she became actively involved in a walking group and incorporated exercise into her regular routine.

Brenda enjoys walking and she has decided to join other walking groups in the community – not only for exercise, but to meet new friends.

Green Prescription Advisor Verina Wihongi says, “Brenda is a good example of a client who has set some realistic goals and is managing to maintain these.

“As a Green Prescription Advisor, we do our best to support, motivate and provide as much information to improve the health and overall wellbeing of each individual.

“I am proud of Brenda. She has held herself accountable for her own actions and is a true reflection of reminding ourselves it is never too late to make changes.”

Since October, Brenda has now lost 10kg, with another 5kg to go.

“I feel a lot better,” she says. “I feel fitter and for me that has worked. You have to find what works for you, and go for it!”