Couples that play together stay together. Just ask Jan and Ken Worthington, married for 49 years and both in their seventies, who each week get along to a Keep on Your Feet exercise class for seniors.

Jan and Ken have been attending the Bethlehem Keep on Your Feet class since February this year. The classes are part of the ACC Live Stronger for Longer initiative designed to reduce falls and fractures in seniors, and are administered by Sport Bay of Plenty in the Western and Eastern Bays. 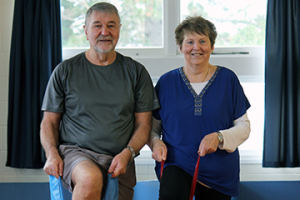 Before joining the classes Jan had trouble with her joints and difficulty lifting her left leg. She also suffers from osteoarthritis.

“The classes are a great way to stay active,” says Jan who has found her balance has improved and she is moving much more freely since starting the classes.

“My physio suggested I take up Pilates, which I am now doing twice a week, and then Ken and I heard about the Keep on Your Feet classes through our local Rebus club and it seemed like a good option for us both.”

Monday, October 1 is International Day of Older Persons and the Worthingtons have a message for others aged over 60 – just keep moving.

Worldwide more than 700 million people are now aged 60 plus, and it’s projected that will increase to two billion, or 20 per cent of the world’s population, by 2050.

Each year one in three people aged 65 and over will fall, explains Keep on Your Feet project leader Rachel Garden from Sport Bay of Plenty, and the risk increases to one in two for those aged over 80.

“There’s good news, though – a 2012 study showed group exercise programmes that focus on strength and balance can reduce falls by 29 per cent.”

Rachel says often seniors’ exercise classes are associated with women rather than men, but it’s important that anyone of any gender keep moving as they age.

Ken couldn’t agree more: “It’s not just about being able to stand on one leg,” says Ken. “It’s about having the confidence and coordination to move in multiple directions.

“Just give it a go – you have nothing to lose and everything to gain.”

You can find out more about the benefits of maintaining strength and balance as you age by visiting livestronger.org.nz.

As part of the ACC Live Stronger for Longer initiative, Sport Bay of Plenty also helps run a number of exercise classes for seniors around the Western and Easter Bay of Plenty.

Find a Keep on Your Feet class near you