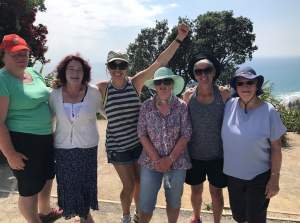 Elizabeth White has lived in the shadow of Mauao for more than 30 years. But she's never felt the urge to climb it.

“Mainly because I never thought I would make it,” she says. “It always looked too steep and I was happy walking around it.”

But a health scare, a will to change and Japanese tourists all contributed to changing that.

Elizabeth had been around the Mount base track often enough, but since moving to the Bay she'd never been tempted to make the 232m final push to the summit.

Then Elizabeth, who's on the wrong side of 70 but the right side of 80, ended up in Tauranga Hospital.

“They thought I'd had a heart attack,” she says. It was an angina attack, but they gave her the best of care, some medication, and two days later bundled her off home to Hairini with a folder containing the elixir of life.

It was Sport Bay of Plenty's Green Prescription programme. The blurb tells us it's a lifestyle support programme providing motivation and information designed to develop a healthy lifestyle through sustainable, physical activity and nutritional changes.

Always someone to give something a shot, Elizabeth got on the phone and joined up with the walking group.

“It wasn't enough, once around the block with the traffic whizzing by. I thought this was a bit boring.”

So, back to the Green Prescription, where she spotted something called “The Mount Challenge” – an eight-week programme building to an assault on Mauao itself. “I thought I would give that a go.”

She says there was never a moment she didn't think she would make, but she gave the organsiers an “out” on the first day. “I told them if it looks like it's too much for me, I will pull out.”

The first day was around the Mount, the second day was up to the reservoir, the third day was beyond the reservoir and so on. “They were very good and very supportive – they would say ‘if you need to stop and get your breath that's okay'. Then on we would go.”

Then, earlier this month, Elizabeth set out from base camp early on a warm day.

“I was very determined,” she says. Up past the reservoir, up the “steep, steep” bit, “step after step after step.” Her hat and her towel were wringing wet.

That's when the kind Japanese tourist lent a hand. “I had stopped to get my breath, and he put out his hand and asked if I needed a hand. He gave me a hand up. It was lovely.”

“There was a sense of accomplishment,” she admits, “but that came much later, a few days later when I was relating my story. It was delayed exhilaration.

For the record it wasn't a first. Elizabeth has previously conquered Mauao – but just the once and about half-a-century ago. “I can't remember the occasion terribly well.”

But once has now become twice and yesterday became thrice. And it will become a habit.

“I intend going up Mauao once a week, every Thursday, for as long as I can. I just hope it's a pleasure that will always be there for us. It's wonderful.

How's the heart? Well, Elizabeth is now taking four pills a day when previously one would have done.

“But if I get more angina, I know what to do. I was going through a bit of stress last time. So if things cause stress, give them up.”