"I am doing things I would not have been able to do six months ago."

When Valerie saw a group taking an aqua class at her local aquatic centre she knew she wanted to get involved, and promptly contacted her doctor to discuss a Green Prescription referral. She tells us the story of her Green Precription journey.

My physical issues are not apparent to people when they meet me (a growth in my spinal column which is choking my nerve stem). The condition has been with me for some time and though the pain management is always a factor, it is essential that I maintain whatever muscle I have left.

Balance is also a factor and I have felt for some time that just managing my daily activities was success. But after seeing a group working out at the aquatic centre, I enquired as to how to join it and was told it was through Green Prescription. It appeared the group would be a good match for my ability level so working with my local doctor and Sport Bay of Plenty, I was approved.

That was five months ago. I have been doing at least two Green Prescription classes weekly at the aquatic centre since then, except for a period of time when I was recovering from a foot infection.

I also learned of a Green Prescription group at the CrossFit centre called Integrate. Again, it was at my level. I am really amazed at how much my stamina and muscle tone have improved in what is really a rather short period of time. I think for too long I felt that workout groups were above my level.

I also recognise that the 'habit' of exercise did not seem to have paid off in the past as it often led to cramps and fatigue. Perhaps it helped that it started in a water setting, one where my balance issues did not come into play (what harm done if you lose balance in water, right?). 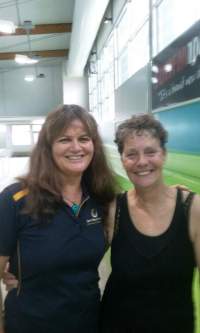 The gain is not just something that happens in the classes, such as finding the workout easier over time. It is showing up in my daily life in a big way. My husband has commented several times that I am doing things I would not have been able to do six months ago.
My core strength, upper body strength and leg strength is greater. I still have balance issues but because I can use the other strengths to help compensate, even that has improved. I did not have a weight issue when I began but I can feel a difference in the way my clothing fits.

I would also like to mention that an added bonus has been meeting people at the classes and getting to know them. In the past my swimming at the aquatic centre did not give me much social connection. I would swim, shower and go home with very little social interaction. But being in a group where you see the same people at classes, I began to introduce myself. And when I would see them around town, they would usually say hello. And then an odd thing happened.

One day in the changing room, I saw a woman from the group who had been at the library the week before. We started talking about books we had read and authors we enjoyed. Other women began to get into the conversation. We now share books/authors regularly. Sometimes someone will bring in a written list of authors they like, and other women will write the names down. I have jokingly referred to it as the Changing Room Book Club.

At this time, I am heading overseas for six months but am determined to keep up the working out. I hope to get a group started informally during that time. I have purchased a set of the foam barbells to take with me. I have already located two women in the new community who are interested. I know that I have now reached a point where the regular exercise is enough a part of my routine that I will find a way to keep it up. This is the first time since I began to deal with this medical issue that I have been able to get a true regiment started that really works for me.

So, thank you to all who are involved with providing this valuable service. We are very lucky to live in a community where this is offered.