“Kaua e whakamā! It’s not easy. The time that it changed for me was with the brain – being in that right mindset."

Ask Sarah Marr what set her on a steady path to health and wellbeing and she doesn’t hesitate to respond: “When I really started to concentrate on myself and my own wellbeing it all just kind of fell into place.”

As a student trying to complete a bachelors degree in social work, and a single mum raising two kids under 10, Sarah was constantly putting others first and her health was suffering as a result. In January 2018, not long after moving to Rotorua, she was diagnosed with type 2 diabetes. The news left her angry and disappointed that her health had deteriorated to that point. 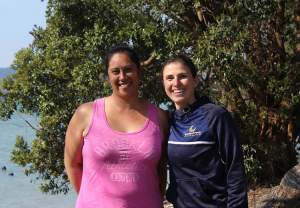 “I was angry at the doctor, and angry at myself mostly for letting it get that bad. I’d had gestational diabetes so I knew I was more prone.”

But as Sarah began to learn more about diabetes she began to understand why she was so tired and lethargic. Her new knowledge and understanding gave her power, and she started to take small but important steps to claw back her health.

“I started off slowly and changed a couple of little things, and then I asked my doctor about green prescription because I had been before.”

She tried a few different activities before giving aqua jogging a go. At first she hesitated to try the classes because she wasn’t sure they were for people her age, but the group welcomed her with open arms.

“I could do it when the kids were at school, and it wasn’t an intimidating gym atmosphere which was cool because I don’t look like the gym bunny people!”

She began to feel better and decided to up the ante a little bit by doing pilates – an activity she loves. She also made conscious little changes that she can achieve every day like parking further away from the supermarket entrance, walking to the dairy and cutting out sugar from her coffee. As she cut out more sugar from her diet, Sarah says her sweet tooth began to subside.

The little changes began to make a big difference, and as Sarah’s weight came down her self-esteem went up and up.

She enrolled in a local weaving class and is excited to be around culture and to discover a sense of belonging. What started as a journey to better physcial health has also turned into a journey of improved spiritual and emotional wellbeing.

“I obviously needed to look after myself and now I’m in a lot better space to carry on with the mahi.”

It’s not just Sarah who’s benefitting from the changes, though – her whānau is also experiencing the positives.

“Now as a whānau we sit down and plan out meals. The kids have a meal date each week and I ask them what they would like to make and then we tweak it and make sure it’s healthy. I’ll help them and we’ll get in the kitchen together. It’s teaching them maths and life skills that they’ll need later on, and they’ve lost weight as well.”

Sarah’s advice for anyone on a similar journey, or struggling to get started?

“Kaua e whakamā! It’s not easy. The time that it changed for me was with the brain – being in that right mindset.
“You’re not going to get instant results which is upsetting sometimes, especially when you plateau for a bit, but just break it down. Sometimes it’s easier to make the pile smaller, and deal with that pile first.”