"Having a stroke changed my life, but now I'm stronger than ever."

Robert was living in Australia with his wife Cheryl. Robert was a fit and very active 49-year-old. He played social basketball, rode his mountain bike regularly and coached a women’s basketball team.

In late 2011 Robert suffered a cerebellar stroke which affected the whole of the left side of his body and also his speech. He was left with limited mobility and balance issues. Robert spent some time rehabilitating with a physio in Australia before returning to New Zealand in May 2014. 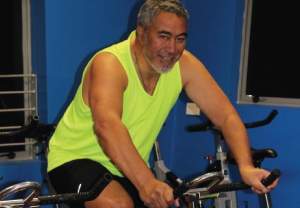 Robert’s GP referred him to the Green Prescription programme with a recommendation for aqua therapy. Robert’s GRx Advisor referred him to an aquatic centre with gym facilities and group fitness classes. Initially Robert started with one class per week but over a period of weeks built up to two. In three months Robert’s strength and balance had improved to the point that he was able to walk for 30 minutes 2-3 times per week and participate in the aqua fit classes.

One year after returning from Australia, Robert added a mobilise class and resistance training to his list of weekly activities. Since then Robert has started the Green Prescription Spin classes and taken part in the Mauao Trail Challenge. He is also an active member of the Volunteer Coast Guard.

Robert feels that the Green Prescription programme has given him the confidence to take on new physical challenges and his advisor has encouraged him to try things he thought that he would never be able to do again.