"Every day I am one step closer to my goal and I’ll never give up."

Maggie Russell has a kind heart and a personality that lights up a room. She’ll welcome a complete stranger into her life with open arms, help anyone with a smile, and always put others before herself. But there was a time when she lost her smile.

“When I put on weight, I lost so much confidence. I didn’t want to be seen and I became a bit of a recluse." 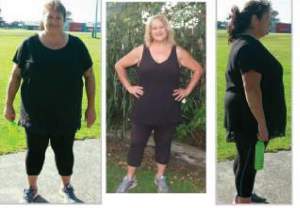 Maggie was, and still is, an active member of the Bay of Plenty sporting community. She was involved in rugby and league alongside her husband, Doug, and as a dedicated mother to sons Scotty and Mikael their family home was always full with kids involved in sport.

“My son said, ‘If you put as much time into yourself as you give others, you wouldn’t feel like this’. And I knew he was right.”
Like many women, Maggie was constantly on the run, juggling her various commitments. She was eating irregularly, skipping breakfast and lunch, and was struggling to fit physical activity into her daily routine.

The busier she was, the heavier she became and the less motivated she felt to get moving.

“I was so big I would think twice about sitting in a plastic chair at a barbecue, I’d worry the seatbelt wouldn’t fit, or I’d see a lovely top but know I couldn’t try it on because it wouldn’t fit.

“Having been small most of my life, then to double in size, it was a hell of an experience and not one I’d like to repeat. I’d like to help people get out of the situation I was in and start putting their health and wellbeing first.”

A significant turning point was when Maggie’s sister was diagnosed as a pre-diabetic. Not wanting to face this herself, Maggie realised she needed to take control and started slowly, but surely, taking steps in the right direction to get her health back on track.
She says the biggest changes were, in fact, eating three healthy meals a day, finding ways to work exercise into her everyday routine and, most importantly, take the time for herself to invest in her wellbeing overall.

“I have my family and all the love and support I could ever have and wish for, but I knew that it had to start and stop with me. I had to look at where I was and where I wanted to be. I didn’t feel well and I was putting on so much weight.”

Maggie has a huge support network around her helping her on this journey, including her loving friends and family, and the Sport Bay of Plenty Green Prescription team (GRx).

She has come a long way (50kg lost to date), but says her ultimate goal is to lose a full 80kg ahead of a significant family reunion in September. But her mantra is slow and steady wins the race, and she knows it’s not about just losing the weight – but keeping it off.

“I want to be healthy and alive for my grandchildren’s 21st birthdays, so by doing what I am doing, I have a better chance now of seeing this happen. Every day I am one step closer to my goal and I’ll never give up.”