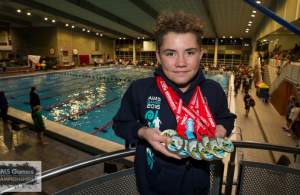 Eight gold medals and a silver were nice but it was a new national record Whakatane swimmer Tarquin Magner was especially proud of at the NZCT AIMS Games this week.

The 12-year-old set the new mark of 30.18secs in the heats of the 50m backstroke, 0.15secs faster than the old record, and dedicated it to his long-time coach Gwenda Ruegg, who died suddenly earlier this year.

“I’m pretty happy with the eight golds – I just wanted to do as well as I could – but I was stoked to get the New Zealand record,” Magner said. “That was the highlight for me and Gwenda had a lot to do with that.”

Ruegg was awarded a Queen’s Service Medal for her services to swimming and theatre in Whakatane and was a big influence on a lot of people in the Eastern Bay of Plenty town, including the rising swimming star from Whakatane Intermediate.

Magner, who lists French freestyle giant Florent Manaudou and Tauranga 1500m star Nathan Capp as his role models, is no stranger to success but his AIMS Games performance was especially noteworthy, dominating the 12-year-old agegroup and winning more gold medals than any other competitor.

His only silver medal came in the 200m freestyle, where Rotorua’s Joshua Balmer (John Paul College) edged him by just 0.03secs.

Close finishes were a feature of the finals night, with Oliver’s 100m backstroke victory the tightest of them all – he finished in 1:05.83 to beat Taiko Torepe-Ormsby (Cathedral Grammar) by just 0.01secs. Oliver was also just 0.05secs clear of Jacob Wong Woo (Rosmini College) in the 100m breaststroke final.