Gold medallist Landers-Murphy a champion on and off the court 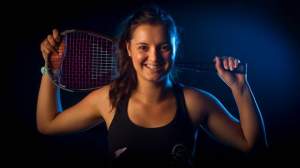 A moment I will never forget was pulling our seats around the television in the Rotorua Daily Post office and watching our very own Amanda Landers-Murphy win gold in the women's squash doubles yesterday.

I interviewed Amanda before she left for the Games and was delighted at what a humble, unassuming and down-to-earth person she was. Throughout last week's tournament I stayed in contact with her via Facebook and she was always more than happy to help with any information I needed, despite being in the middle of one of the biggest sporting events of her life.

On Sunday, she outdid herself again. There are not many gold medal winners who would agree to a phone call from their local newspaper just 10 minutes after playing in the final, but Amanda did and it was truly appreciated.

Even during the interview, she was determined to highlight how well her doubles partner Joelle King had played and how much support she had received from friends, family and the New Zealand team at the Commonwealth Games.

Covering the final has been one of the highlights of my journalism career so far, and I don't think it was just because it was one of our local athletes involved. It was because, through my dealings with Amanda, I felt like she deserved to be successful.

Rotorua should be proud of its golden girl.