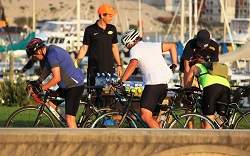 Hundreds of people ‘went by bike’ to work and school on Go By Bike Day in the Eastern and Western Bay of Plenty today.

The sun was out and over 400 people stopped by the six pit stops in the Tauranga region to collect prizes and refreshments and go in the draw to win vouchers from Ride Bikes.

Western Bay of Plenty Recreation Advisor Dahl Gurdit-Singh said, “A lot of regular cycle commuters commented about the increased number of cyclists today which is a positive sign as the purpose of Go By Bike Day is to encourage more people to consider this mode of transport that is both healthy and fun”.

In the Eastern Bay over 200 people stopped at the five pit stops and went in the draw to win a brand new bike!

Eastern Bay of Plenty Cathy Bell was particularly impressed with the effort of eleven local schools this year that put on their own pit stops and encouraged their students to bike to school, “We had schools in Kawerau, Opotiki, Whakatane, Ohope and even Waimana take part,” said Cathy.

It was great to see a number of Tour de Bay participants from both regions biking to work today too in an effort to clock up a few more kilometres.

CLICK HERE for images from Go By Bike Day.