Getting Tauranga off its butt 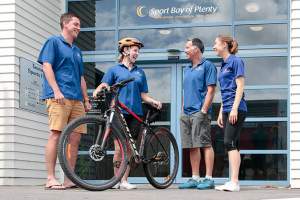 It's a scary statistic buried away in a Ministry of Transport household travel survey showing just how sedentary New Zealanders have become. Sedentary – characterised by much sitting and little physical activity.

“I'm not sure how they have measured this,” admits recreation team leader for Sport Bay of Plenty Sonia Lynds, “but I am not surprised that this is normal for some - especially as it doesn't include going to the water cooler or strolling through the supermarket.

“We have been hearing a lot about increased inactivity levels recently.”

Inactivity, along with poor nutrition, tobacco and alcohol, are the four leading health risk behaviours leading to heart disease, stroke, cancer, type two diabetes and obesity – some of the most common, costly and preventable of all health problems.

One statistic from Sport NZ's Active NZ survey, however, was that Bay of Plenty people do participate regularly in the outdoors.

“There is a lot of evidence that shows we have many active people here,” says Sonia. “We do like to make the most of our landscapes, beaches, forests and lakes and get out and play in the Bay.”

But, she says we would be kidding ourselves to think we're not a significant part of the Ministry of Transport statistic.

“The problem is we're competing with a lot of fun, sedentary options such as social media, TV and computer games - all of which encourage us to sit more often,” says Sonia. “These sedentary alternatives are sometimes impacting our healthy lifestyle goals as most involve sitting in front of a screen for long periods of time.”

Many people have become caught up in the ‘busy' of their lives and traffic congestion hasn't helped.

Unfortunately, lunchtime exercise, such as a walk, could be the thing that gets compromised as a result.

That's where Sport Bay of Plenty wants to help get people moving with initiatives such as Bike Month – a month-long programme promoting bike transport and getting people out of cars and onto bikes. It's called active transport, and there are lots of opportunities for people to increase their confidence on a bike.

“If you've experienced our traffic queues recently, you will understand you can probably get to many places during peak times quicker on a bike.”

Even 100 metres, which is just one minute of walking a day, is not the prescription for well-being.

“The absolute minimum is at least 150 minutes of huff and puff, getting the heart rate up, a week,” says Sonia. “You don't have to do it all at once, you can do it in chunks.”

It's also about attitude. According to Wellington exercise physiologist Brendan Roach, the answer to turning around a sedentary lifestyle is normalising physical activity as well as healthy eating.

Right outside the Sport Bay of Plenty office in Devonport Road is the office bicycle. Anyone can book the bike to go between meetings. The idea of having the bike is so that it becomes ‘normal' behaviour.

Sport Bay of Plenty is also working with companies to help employees be as active as possible – it's good for productivity and long term health. One way is to provide some flexibility when possible, such as delayed start times or earlier finish times if people want to participate in activity while avoiding the peak traffic.

Workplaces can also support active transport by providing safe and secure areas to park bikes and have showers for people after they walk, run or ride to work.

“Having a workplace that encourages physical activity is a major factor in increasing participation.”

And that is Sport Bay of Plenty's raison d'etre – enriching lives through sport, recreation, physical activity and healthy living.

“I think our message is getting through. Our main goal in the recreation space is to reach people that might not have thought about some of the options out there and to keep providing opportunities for beginners, to increase confidence to give something a go.”

On top of that, 69 per cent were interested in trying a new sport activity or doing more of an existing one. But the biggest struggle is with the mindset of those who haven't considered their lifestyle being a problem.

“That's why the Sport Bay of Plenty message needs to spread its tentacles far and wide, influencing people anywhere and everywhere.”

Sonia talked about ‘snack-tivities' – morsels of exercise that tempt people to get out and do stuff, such as driving the kids only halfway to school and then walking the rest of the distance with them.

“There are many ways of sneaking in exercise,” says Sonia.

If there's 10 minutes to spare, use it – go for a walk, a jog, a run, a ride. The theory being if you are active for small amounts of time, they add up.

“You don't need half-an-hour,” says Sonia. “Ten minutes at a time is okay if you do this a few times throughout the day. And if you put it off, you will probably never do it.

“Everyone is different, everyone has their own physical literacy, or their own experiences of physical activity up until this time - why they are active or inactive, what they eat or don't eat, what has got them to this point?”

So Sport Bay of Plenty needs to connect people to as many different options as possible, to reduce as many barriers to activity as possible and to change habits.

Sport Bay of Plenty is about getting out and getting moving.

“This sitting around and not moving for hours on end is driving up the obesity stats. And the more we sit, the harder it is to get out and do something.”

Not just walking at least 100 metres a day – but factoring 150 minutes of moderate/vigorous activity into your week, one walk at a time.