Gearing up for the opening of Crankworx 2017 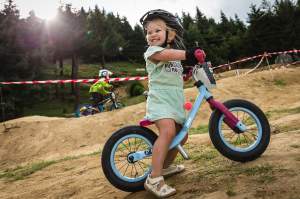 Held at the Village Green, Rotorua Lake Front, the ceremony will begin with a pohiri, led by Monty Morrison, followed by guest speakers, a cultural performance and a karakia. Should rain occur, the wet weather location is the Sir Howard Morrison Performing Arts Centre Banquet Room.

The ceremony marks the start of nine action-packed days, which bring together the world’s downhill, slopestyle and enduro legends with the superfans, rising stars, industry innovators and the next generation of mountain bike riders.

Crankworx also has a dedicated kids’ section, dubbed Kidsworx, which includes free activities and riding available throughout the day, as well as three competitive events for the groms.

“Something special we noticed last year was how young the kids were that were getting into it. We had a bunch as young as two-years-old who were riding the trails on their runner bikes.”

For the kids aged 6-12 years old, there’s also competitive events where they can hit the big trails just like their Crankworx heroes.

Entries for the Skyline Warrior Downhill Race (9-12 years) and the Kidsworx Pump Track Challenge have sold out, but entries are still available for the Hipster DH Race (6-8 years), however Kidsworx event manager Belinda Farmer says it’s filling up quick.

“There’s only 40 places left so parents need to get in fast to enter their kids.

“It’s so awesome to see such a big interest in the Kidsworx events. These kids are the up and coming Crankworx riders so it’s invaluable for them to be exposed to and experience the Crankworx festival at such a young age.”

All Kidsworx events are free with a valid Crankworx ticket and the Kidsworx area is open daily from 10am-5pm.