Garth Weinberg of Rotorua wins another singlespeed title in Waihi 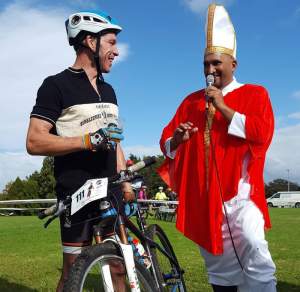 The first New Zealand Singlespeed Championships were held in Rotorua in 2008 and local man Garth Weinberg took the win.

In the 10 years since he has proven it was no fluke.

Singlespeed events are truly unique. Riders dress in a wide range of weird and wonderful costumes, there are shortcuts that can only be taken if you drink a beer and the winners are not official until they get a tattoo marking the victory.

Weinberg won the New Zealand Singlespeed Championships for the fifth time in Waihi recently. His body is becoming quite the canvas, with five New Zealand singlespeed tattoos alongside the one he received for winning the world championships in 2010, the first time they were held in Rotorua.

The 45-year-old has also won the Australian Singlespeed Championships twice, but there were no tattoos for those victories.

Weinberg was "stoked" to win another New Zealand title, his first since 2013.

"It was a bit of a surprise, I thought I might be top three if it all went well, but I wasn't expecting to win it. The course seemed to suit me and it turned our really well.

"It was a really exciting event, the sounds were pumping, everything was really hyped up and the spectators were loving it. That's what made it really, the spectators up in the forest."

He said the Waihi course had a "good mix" of trails.

"A lot of it was steep, single-track, windy - not too technical. The other half was round the base of a mountain with heaps of streams, it was quite picturesque. That was tight and winding, dodging trees and things.

"I was maybe mid-pack at the start, I didn't panic and got to about fifth place reasonably early in the first lap, then worked my way from there."

Weinberg got into riding singlespeed mountain bikes in the early 2000s when he met a scientist from America who rode one. Now he does not ride anything else and is often seen competing at the very top level against talented riders on fully geared bikes.

"It looked really simple and cool. I see it as a personal challenge now and I couldn't see myself doing anything different."

He plans to ride in the 2018 Rotorua Winter Mountain Bike Series, which starts in July, and the Craters Classic in Taupo in June.

"I'm not getting any younger, so I'm just trying to stay ahead of the young guys. There's some really good riders coming through with a lot of potential. I'm always being pushed."