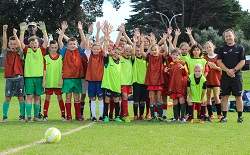 Future Champions is a chance for promising athletes to interact with each other, listen to guest speakers, learn about nutrition, get feedback and practice their skills in drills and games.

Thanks to all the coaches from BayTrust CoachForce and the various clubs and Regional Sporting Organisations that made the three days such a success.