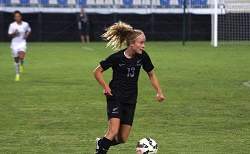 FORMER Rotorua United player Paige Satchell has been selected for the New Zealand Football Ferns squad to face the Australian Matildas in June.

Satchell has been named as part of a 20-strong squad for the fixtures on June 4 and 7 in Ballarat and Melbourne - matches being used as preparation for the Rio Olympics.

The 18-year-old winger was picked this week after excelling in recent local training camps staged in Auckland, where her club, Three Kings United, which she joined last year, is based.

Satchell also played for local side Ngongotaha AFC until the age of 9, developed through the Waikato Bay of Plenty talent centre and was selected to play for Rotorua Reps.

"I was quite surprised to receive the call. It's something that I have been working towards but I didn't think the callup would come so quickly," Satchell said.

"It's very exciting and I can't wait to meet up with the whole squad and I really think we can do well in the two games.