Football and rugby most popular 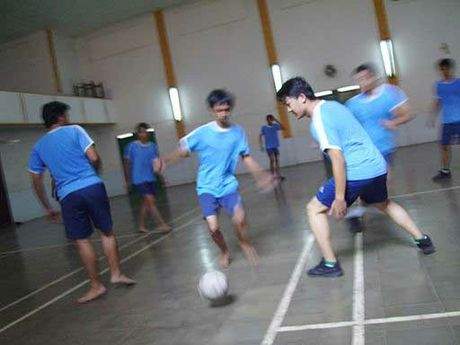 More than 16,500 adults and children - or about 10 per cent of people in the Western Bay - play one of the five main winter sports.

New figures provided to the Bay of Plenty Times Weekend reveal the most popular is football, with 4034 children and adult players, followed closely by rugby (3937) and netball (3850), then basketball (2500) and hockey (2300).

Western Bay of Plenty football development officer Peter Smith said the sport, which was the world's most popular game, was gaining momentum in New Zealand.

In the Bay, numbers increased by between 3 and 5 per cent each year, he said.

"There has certainly been a swing in culture in the last two to three years," Mr Smith said.

He attributed the growth to an improved structure nationally, local initiatives and the migration of people from countries, such as the UK and South America where football was the dominant sport.

With the 2015 Fifa under-20 World Cup to be held in New Zealand, it would continue to grow, he said.

"It's going to be massive."

Football may have the most participants in the Bay, but only just.

Bay of Plenty Rugby Union operations manager Neil Alton said a figure was not yet available for this year but he expected it to be similar to last year - 3937.

The Bay of Plenty has always been a strong rugby province and the number of players grew on average 5 per cent each year, he said.

The Rugby World Cup, the sport's inclusion in the Olympics, the popularity of rippa rugby in primary schools and an increase in female players accounted for its increasing numbers, he added.

Helen Dodge, Habourside's chief executive, said the number of players increased about 2 per cent each year.

Kia Magic did a lot to raise the profile of netball in the Bay, she said.

Katikati Netball Centre president Leanne Emery said numbers "weren't looking very good in Katikati a few years ago" but had bounced back after several initiatives, including lunchtime coaching in the primary school, social netball for adults and providing improved competition for the players.

"I am very proud of and impressed with the skill level and amount of netball being produced in Katikati at the moment," she said.

"It also has quite a high profile on TV so the girls can see what they aspire to. Little girls want to be like Silver Ferns," she said.

Unlike netball, basketball is considered a minority sport in New Zealand, but in the Western Bay it has an impressive 2500 players.

Tauranga City Basketball general manager Mark Rogers said there had been a 10 per cent uptake in primary school miniball this year. Numbers were also "well up" in intermediate schools.

The new ASB Arena had helped boost the sport, he said.

"Obviously it's a nice place to play and for parents to come and watch, with relatively easy access."

The Breakers' success had also bolstered the sport's appeal.

"It's fast, rapid action and it doesn't have the breaks you have in some of the other sports.

"You're on offence and defence, you play both ends and everyone gets a chance to score. And it's indoors in winter," Mr Rogers said.

Hockey in the Bay has also been given a leg up by the glamour of international achievements.

"It helps that our Blacksticks women and men are doing so well on the world stage at the moment," said Tauranga Hockey Association general manager Clyde du Toit.

While this year's numbers were being finalised, the number of hockey players in the Western Bay could reach 2400, compared with 2100 last year, he said.

As had the two new turfs.

"The ability to play on a brand new facility is huge," he said.