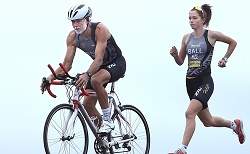 A father and daughter will be competing at the same world championship event early next month.

Former Bethlehem College student Morgan Ball and her father Max will both represent New Zealand at the World Duathlon Championships in Aviles, north-west Spain on June 5.

"I started running when I was about 35 I guess - so I've been a bit of a runner, but cycling's pretty new," said Max.

"It was Morgan's idea. About a year or so ago, she said, 'Let's buy some bikes and see if we can qualify for this thing in Spain.'"

Now 19, Morgan only began running in her final years at college.

"I've been a runner for probably the last three years and I've had a coach for the last year - man, I wish I'd done that sooner it's so helpful," she said.