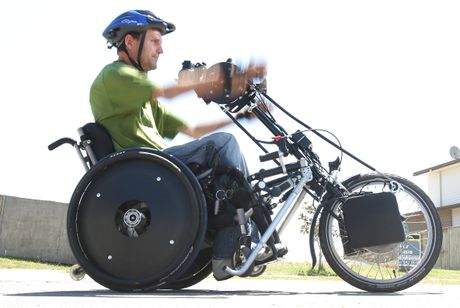 Parafed Bay of Plenty - you may not have heard of this organisation yet - let me explain. The movement started in 1968 as a competitive outlet for those with significant permanent physical or sensory disability caused by injury, disease or birth abnormality. It was very successful under different guises and exponentially for this community in respect to the well known benefits of sport.

In the mid-late 90s as cogs started to squeak for a lot of volunteer sporting organisations so too our sector grappled for survival. The then national body Parafed NZ rebranded Paralympics New Zealand, focusing on elites and cut ties with regional bodies and grass roots, effectively leaving the fish with no head.

You can imagine the fragmentation to follow, then frustration and misinformation. This led to the disintegration with only a few strong main centres holding on to a few sports and members.

This injected life into a number of regional Parafeds and effectively created BOP, but couldn't quite establish a sustainable national body.

In stepped the Halberg Disability Sport Foundation, now recognised as the lead agency for physical disability sport in NZ, from the people to the Government. They have been tasked with tying the highly-fragmented sector together - 12 regional Parafed's and potentially up to 90 National Sporting organisations that could have disability components to their organisation.

The reality is that today there won't be 90 NSOs involved as it isn't possible for a myriad of reasons.

Still, it is a big task that has got Parafeds around he country breathing a sigh of relief. Somehow you have faith in an organisation with the name of our great Sir Murray Halberg.

We now can focus on providing true sporting pathways for our community.

Parafed BOP will host our regional flagship event this weekend, the Eve Rimmer Games in Whakatane.

Our local athletes and some neighbours will get a taste for competition in Paralympic sports of boccia, goalball, rowing, athletics, lawn bowls, table tennis, handcycling/wheelchair racing, equestrian, wheelchair basketball and wheelchair rugby.

You should come down and have a look.

For more info on the games or Parafed BOP visit - www.parafedbop.co.nz