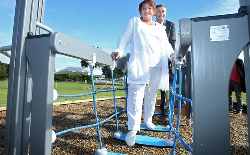 The $26,000 outdoor gym is designed to help keep older people fit and healthy.

Seniors United to Promote Age-Friendly New Zealand (Supa-NZ) national convener Carole Gordon said it had been a long time coming but it was wonderful to finally see the gym in place.

The organisation promoted the installation of the gym and have worked hard to fundraise for it. Ms Gordon said she hoped the gym would become a destination. She was already aware of groups who have indicated they will bring exercise classes to the park.

"This is the beginning. It's a prototype," Ms Gordon said.

She said the gym was the first of its kind for the city but there were hundreds and thousands throughout the world, and they were a big hit. "There's a lot of science behind it. It's scientifically designed to strengthen muscle skeletal resistance."

The project had been supported by the city's Elders Forum and its offshoot, the Older Persons Activity Forum. The activity forum was established to promote outdoor activities for older people in Tauranga and included representatives from Sport BOP, the YMCA, Age Concern and Bay Venues.

Funding for the project came from TECT, Bay Trust, the Community Development Match Fund and a contribution from City Care as part of their Project Tauranga contribution.